In the 1994 movie The Shawshank Redemption, a character named Red (played by Morgan Freeman) speaks to new inmate Heywood (William Sadler) about a prisoner who’s been serving there a long time…

“The man’s been in here fifty years, Heywood. Fifty years! This is all he knows. In here, he’s an important man. He’s an educated man. Outside, he’s nothin’! Just a used-up con with arthritis in both hands. Couldn’t even get a library card if he applied. You see what I’m saying?
These walls are funny. First you hate ’em, then you get used to ’em. Enough time passes… you get so you depend on them.
They send you here for life, and that’s exactly what they take. The part that counts, anyway.” 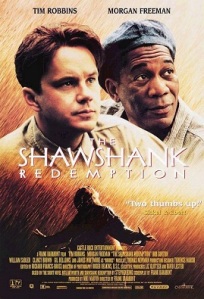 The film is a fascinating insight into the impact of imprisonment. It shows how, even when ‘free’, some inmates prefer their old life. They’re so used to the prison routine that they don’t know how to live anywhere else.

I think we can all relate to this on some level. There might be areas of our life where we’re entrapped, imprisoned. But the prospect of change is terrifying. Life outside the walls might be less consistent, less ‘safe’ – and breaking free might make us feel more caged-in than ever before. We’re afraid of the unknown – the unfamiliar – so we remain in our shell. Unmoving.

Victims of abuse can suffer from this mentality. As the quote says, first they hate it, then they get used to it – then they might, in a strange way, depend on it. Abuse is the only reality they’ve ever known. In the worst cases, the victim becomes a perpetrator too because they’ve never understood the pattern they are in.

When true freedom doesn’t seem so ‘liberating’, we are stuck. When old ways become the only way, we are frozen.

Only when we unlock the door, dream about the possibilities outside, and dare to step out – do we find there’s a whole other world out there. We don’t have to be victims of our past. We don’t have to stay entrapped. There are always people who can help us find courage – and wings.