I’m fascinated by the word control… The concept itself, and the reasons behind our desire for it intrigues me.

I really wonder if control is indeed an illusion. I mean, how much control do we actually have? Emotions and thoughts flutter in and out of our minds constantly – often uninvited it seems. And yes, there is usually a source or a cause, and that can do with some looking into. But in a sense we don’t choose most of the thoughts we have. They simply come naturally, as part of who we are or the experiences we’ve had. We might have a better handle on them than we did before – or so it seems – but many will continue to come and go, day in, day out. Sometimes it can feel you’re imprisoned by them.

How much in your life do you feel in control of? How much do you try and control others? Few of us would admit to being controlling – though I know a few people for whom a ‘Control Freak’ T-shirt would be appropriate 🙂 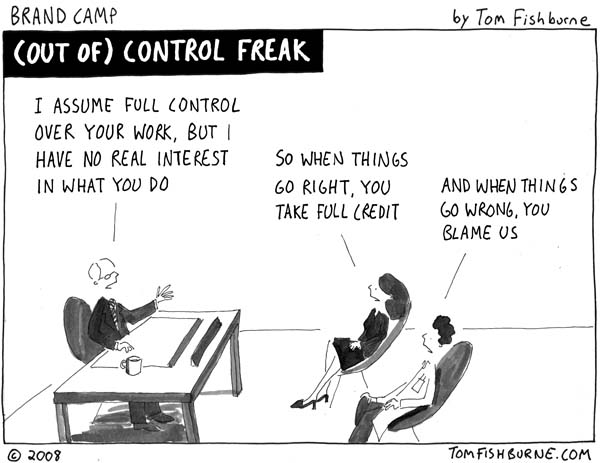 But I think when someone has genuine control issues, it’s largely stemming from a place of vulnerability. When we feel misunderstood, shut down or ridiculed, it’s human nature to try and claw some power back. Maybe somewhere along the line you lost the control you thought you had – so your intinct is to fight. Or to play with other people’s emotions to make you feel more important and validated.

Ever heard the saying ‘God is in control’? It’s a Christian cliche for sure, but it’s something I believe to be true. If we believe the Bible to be real and accurate, God – with all the control and power that is rightfully his – created the world, including you and me. He orchestrated a plan that would see him coming to Earth in the form of his son, Jesus. His son would be born of a virgin, grow up to challenge the status quo through his recorded miracles and teachings, then die a horrible death, taking on the sins of the whole world – including mine – so we could be forgiven. He would rise from the dead to prove he is God, and then return to his father, promising to return for his adopted children one day. And that day is yet to come. His Holy Spirit resides in those who choose to turn from their old life and believe in him, and this Spirit counsels us, leads us, and offers us hope and joy for a wonderful, purpose-filled life in a relationship with him.

When we think of control, we might imagine those who have abused and mis-used power, manipulated or coerced. But the only one who truly has the right to be ‘in control’ – and who actually is – hasn’t, and won’t abuse. He is a God of justice, but he doesn’t take pleasure in controlling our lives like a larger-than-life puppeteer. He allows us choices, but he is ultimately in control of the world. It’s a baffling paradox. He could shut Earth down in a day, and has demonstrated his power and supremacy many times – yet he still allows his plans to be worked out in line with his divine purpose and will, through us. He has given us a will to choose him and the lives we lead – yet he is still all-powerful, and works through each and every situation.

Life seems to me like a pendulum of control, and no control at all. God is in control – yes. And he chooses to engage with me and you in the person of Jesus Christ. Jesus is the face of God, “the radiance of God’s glory and the exact representation of his being” (Hebrews 1:3). He is more real to me now than he used to be because I’ve walked many roads with him. And I’ll probably walk many more until I meet him face to face.

Meeting him meant that I, in a sense, gave up control of my life, and allowed him to take over. And unlike a dominating parent or a manipulative friend, Jesus walks alongside me, gently guiding me – yes, showing he is in control – but also giving me choices that will ultimately mean my freedom, and the freedom of others. That’s the kind of God I want to serve – always.